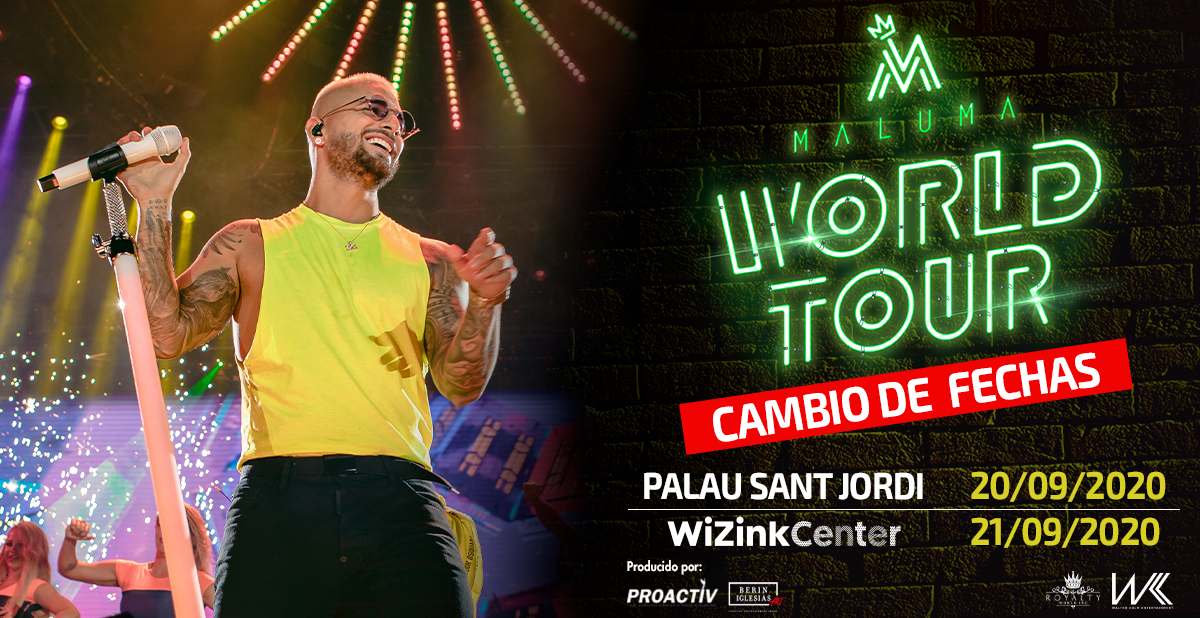 CHANGE OF DATES IN MALUMA'S CONCERTS

CHANGE OF DATES IN MALUMA'S CONCERTS

In view of the exceptional health situation caused by the outbreak of COVID-19 and in order to guarantee the best conditions for the development of a massive show, the Maluma concerts scheduled for 28 March at the Palau Sant Jordi in Barcelona and 29 March at the WiZink Center in Madrid have been postponed to 20 and 21 September, respectively.

Both concerts will be held at the same venues initially scheduled and the tickets previously purchased will be valid for the new dates. In case of not being able to attend, a return process will be opened from Monday 16th March until March 27th, both included. Those interested should contact the sales channels where they were purchased. All those who have bought their tickets at Proactiv.es can send their return request to entradas@proactiv.es.

Maluma and its management office WK Entertainment, as well as Proactiv and Berin Iglesias Art, regret any inconvenience that may arise and wish to emphasize our commitment to safeguarding the welfare of all attendees, our team and the artists.

At only twenty-five years of age, Maluma is widely considered one of the leading voices in Latin music and a bona fide global youth idol. Born Juan Luís Londoño in Medellín, Colombia, he formulated his artistic moniker Maluma from the first two letters of the names of his mother, father and sister. The 2018 Latin GRAMMY award winner for Best Contemporary Pop Vocal Album (for F.A.M.E.) is one of social media’s most popular artists with over 23 million Facebook fans, 6 million Twitter followers, and a whopping 46 million Instagram followers (making him the leading Latin male artist on Instagram).

With his 11:11 World Tour, the box office giant, is taking the world by storm once again. This summer he sold out shows in Poland, Portugal, Hungary, the Czech Republic and Morocco, where he attracted a crowd of 200,000 people. Maluma is now in the midst of the Sold Out North American leg of the tour and excited to return to Barcelona & Madrid Next March.