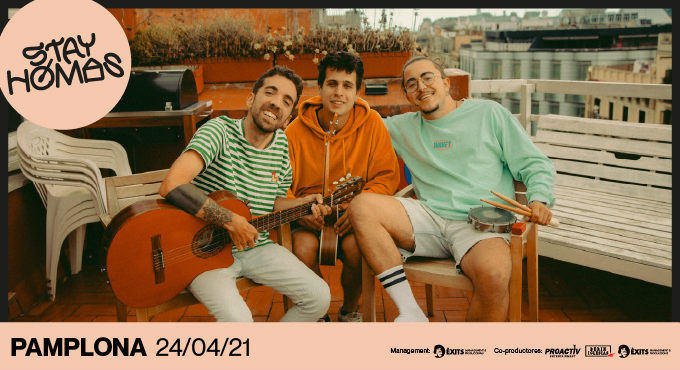 Stay Homas announces international tour. The revelation group of the confinement will present its show across the Spanish territory, the main European capitals, and Latin America.

After the success of Stay Homas, as a result of their creativity and ingenuity shown during this confinement, and after a massive popular demand via Social Networks Klaus, Guillem and Ray want to thank their audience by going on tour from March 2021. The promoters, Proactiv, Èxits, and Berin Iglesias, in co-production, have made this international tour possible which will take them to the stages of the main cities of the Spanish territory, those of great European capitals such as London, Paris, Brussels, Amsterdam or Milan and those of other Latin American countries such as Brazil, Argentina, Chile or Mexico.

An unexpected dream has come true for these three young musicians, who by chance in life decided to start sharing an apartment just two months before COVID-19. From their first vermouths on the terrace and the desire to play to cheer themselves up, the "Confinations Songs" were born, homemade songs that captured their experiences of confinement. And from here to travel round the world. Stay Homas are an authentic phenomenon that has impacted on a global scale. In three months, they have achieved more than 400K followers on Instagram and, almost 90K subscribers and 12 million views of their songs on YouTube.

The Stay Homas phenomenon has been absolutely organic and, thanks to the public that has welcomed them with open arms, they have received the recognition and complicity of artists such as Michael Bublé, Pablo Alboran, Manu Chao, Silvia Pérez Cruz or Rubén Blades and have aroused the interest of prestigious international media such as The New Yorker, CNN, NBC, BBC, Le Monde and other media around the world.

Stay Homas also publishes a mixtape titled 'Deconfination' which gathers the 5 most voted songs by the public. Of these, they have already shown 'In The End' and 'The Bright Side' with Josep Montero from Oques Grasses. The rest of the songs will be gradually published until the 3rd of July, when the last ones will be released. This mixtape shows what Stay Homas are capable of when they have all the musical resources at their disposal, and it gives a glimpse of what their debut album could be in autumn, without a doubt one of the most promising releases of the year.

Map of the enclosure